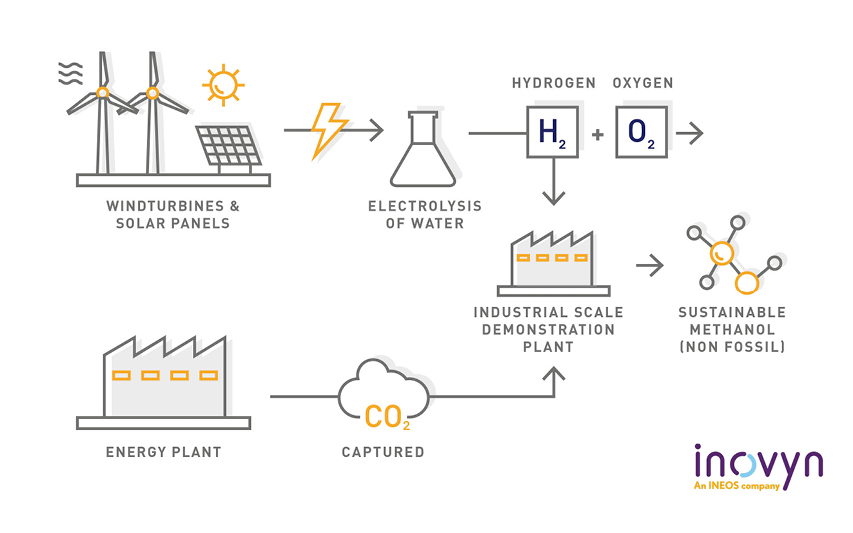 INOVYN has today announced its role in an ambitious ‘Power to Methanol’ project set up to further investigate options for sustainable methanol production in Antwerp, Belgium.

As part of a 7 strong consortium, comprising leading industrial and business partners, INOVYN will contribute to a joint feasibility study for the production of methanol from captured carbon dioxide and sustainably generated hydrogen.

Subject to the success of the study, an 8,000tpa industrial-scale demonstration plant would be built at INOVYN’s chemical manufacturing complex at Lillo. This would be the first of its kind for Belgium, with the methanol produced being used by chemical companies in the port of Antwerp cluster.

The carbon dioxide is captured by means of Carbon Capture and Utilisation, through which CO2 emissions are partially recovered and then combined with hydrogen generated from renewable energy. For each tonne of methanol produced at least one tonne of CO2 emissions would be avoided.

Comments Geir Tuft, CEO INOVYN: “This is a very exciting project and an excellent fit with our sustainability strategy, which includes pursuing options for alternative energy and the sustainable, lower carbon production of chemicals. Specifically, INOVYN will contribute its expertise in hydrogen production and electrolysis to the project, and has identified a suitable location for the proposed demonstration plant at our Lillo Site.”

Future development could see increased volumes of sustainable methanol produced for wider industry use, including as a sustainable fuel for marine and road transport.

Formed on 1 July 2015 and part of INEOS, INOVYN is a vinyls producer that ranks among the top three worldwide.  With a turnover above €3.5 billion, INOVYN has more than 4,300 employees and manufacturing, sales and marketing operations in ten countries across Europe.

INEOS is one of the world’s largest chemicals companies and the 50th largest business in the world, employing around 22,000 people across 183 sites in 26 countries. It is a privately-owned company with sales in 2018 of $60bn and EBITDA of $7bn. In addition to its growth in petrochemicals, it has acquired oil & gas fields in the UK, Denmark and Norway and is a top 10 company and the biggest private enterprise operating in the North Sea. www.ineos.com