Flemish support for Power to Methanol to save 8,000 tonnes of CO2 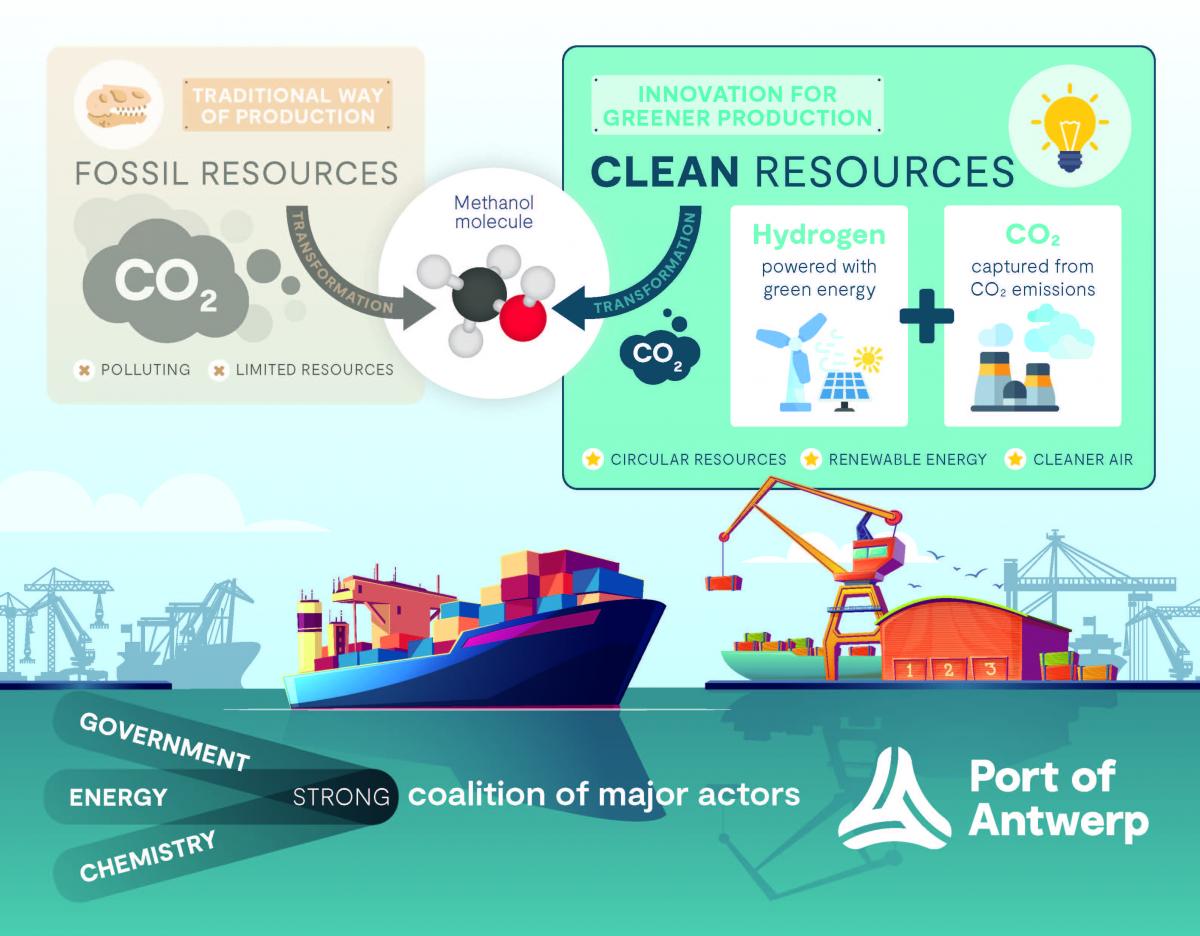 On the proposal of Hilde Crevits, Flemish Minister of Economy and Innovation, the Flemish Government has decided to support the Power-to-Methanol consortium with €1 million. This will allow the consortium to fully develop an innovative technique to capture and reuse CO2. This support makes the installation of a demo plant possible. Annually, the factory will produce 8,000 tonnes of sustainable methanol and save at least as much carbon emissions. That is the equivalent of 8,000 flights from Paris to New York and back.

Capture and reuse of carbon

The port of Antwerp is home to the largest chemical cluster in Europe. The pressure to limit CO2 emissions and thus combat climate change is also increasing in the port. The technique of carbon capture and utilisation (CCU) makes it possible to capture and reuse the CO2 that is released.

In April 2020, ENGIE, Fluxys, Indaver, INOVYN, Oiltanking, Port of Antwerp and Participatie Maatschappij Vlaanderen (PMV) up a company under the name Power-to-Methanol Antwerp BV. This consortium is dedicated to the sustainable production of methanol, an essential raw material that is used by industry in the port and can also be used in transport applications.

At the present time, Power-to-Methanol Antwerp BV is getting ready to invest in a CCU plant. The construction of a demo plant on the INOVYN site, which forms part of INEOS, is set to commence on the Scheldelaan by 2022. Each year, this plant will produce 8,000 tonnes of sustainable methanol from hydrogen generated from renewable energy and captured CO2. Producing methanol this way will make it possible to save at minimum the same quantity of CO2 emissions per year, if not more. That is the equivalent of 8,000 flights from Paris to New York and back or the average annual emissions of 1,000 Belgians.

Funding of €1 million from the Flemish government

Given the highly innovative content and the complexity and size of the project, preparatory studies on the economic and technical feasibility of the plant are needed in order to prepare and then roll out the planned investment in the most effective possible way. The Flemish Government has now decided, on the proposal of the Flemish Minister of Innovation Hilde Crevits, to support the project financially by providing funding of €1 million, or 50% of the project budget for the current study phase.

"There is no doubt about the positive impact of the installation. Sustainable innovation is necessary to reduce emissions from our ports and industry, and to maintain jobs in these sectors in Flanders. CO2 capture and reuse is therefore a very important technology for making that sustainable leap. We are providing the much-needed financial support so that the consortium can prepare itself optimally."

“The port of Antwerp has the ambition to become climate neutral by 2050. The power-to-methanol demo plant is an important milestone in achieving this goal. The concrete realization of this CCU installation is made possible by various port companies that are joining forces and by the financial support of the Flemish government.”

“This support is a major boost for the Power-to-Methanol consortium. As such, the port of Antwerp is taking another important step in the transition to alternative energy sources and a sustainable, low-carbon and circular port.”

"ENGIE's ambition is to support its customers in accelerating their energy transition and by so doing to decarbonise the ecosystems in which they operate. With the Power-to-Methanol project, we intend to achieve these goals through co-creation and research, in collaboration with our partners in the consortium. We are delighted that Flanders is supporting us in this and is putting its weight behind the further development of this innovative production unit.”

“This challenging project fits perfectly with our sustainability strategy, which includes a commitment to alternative energy and the sustainable, low-carbon production of chemicals.  In particular, INOVYN will bring its expertise in hydrogen production and electrolysis to the project and has a suitable location for the proposed demonstration plant on its site in Lillo.”

“We will only achieve CO2 neutrality through partnerships and by focusing on new technologies and solutions. Funding can help us to ensure that complex and risky projects are able to be realised after all. We are delighted to join PMV in putting our shoulders to the wheel on this project to bring about the transition to a more sustainable economy.”

“We are pleased with the decision of the Flemish government to financially support our joint innovative project within the port of Antwerp. This brings us yet another step closer to making the CCU-installation a reality. At Oiltanking we will remain committed storing circular product flows in a safe, flexible and reliable manner.”

Part of INEOS, INOVYN is Europe's leading producer of vinyls and in the top three worldwide.  With an annual turnover of €3.1 billion, INOVYN has circa 4,200 employees and chemical manufacturing, sales and marketing operations in 8 countries across Europe.